A Weekend with Mr. Darcy & Dreaming of Mr. Dacry by Victoria Connelly 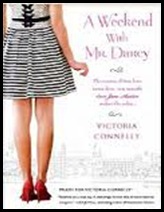 Title: A Weekend With Mr. Darcy

Surrounded by appalling exes and fawning students, the only thing keeping professor Katherine Roberts sane is Jane Austen, and her secret love for racy Regency romance novels. She thinks the Jane Austen Addicts weekend will be the perfect getaway. Maybe she’ll even meet her own personal Mr. Darcy…(from the back of the ARC)

Katherine Roberts is in need of some time away from her everyday life, far away from her disastrous ex-boyfriend David and those who look down their noses at the sexy Regency romances she loves to read. Her escape comes in the form of a Jane Austen Conference hosted by Dame Pamela. Invited as a guest speaker, Katherine cannot wait to escape into the world of Jane Austen. Although things do not quite go as planned when a suitcase assaults her.

Lawton Warwick never imagined that his first encounter with Katherine Roberts would involve running over her foot with a suitcase, yet that is indeed what happened. So much for first impressions. Now he is trying desperately to make amends and succeeding. Yet he is harboring a secret that could destroy everything he has work to gain.

Robyn Love is hopeless romantic, but then again, what would you expect from someone with a name such as hers? Obsessed with Jane Austen, she cannot wait to see what this weekend holds, and she was hoping for a bit of space from her boyfriend, Jace. Although things do not go as planned, instead of breaking up with him, he ends up accompanying her to the conference. While Jace has promised to stay at the B&B, he ends up becoming bored and--um, shall I call it ‘visiting’ Robyn at Purley Hall. Making a nuisance of himself and embarrassing Robyn tremendously.

Then we have Dan, the man who tends to the stables at Purley Hall and has captured Robyn’s attention. Now Robyn finds herself drawn to him, while still in a relationship with Jace.

So, what are they to do?

I have this series book three times now since it was released and it still has not gotten old to me.

A Weekend With Mr. Darcy is the perfect way to start an Austen Addicts trilogy. Not only does Victoria Connelly pull you into the world that she creates, she reminds you why you first fell in love with Miss Austen.

A romance worthy of Jane Austen herself

Shy, brilliant screenwriter and producer Adam Craig throws himself into work to forget his broken heart. And Jane Austin addict Kay Ashton purchases a B&B in the seaside town of Lyme so she’d have a peaceful place to finish her book, The Illustrated Mr. Darcy. Neither is looking for a romance. Until they meet-and Kay tries to set Adam up with another woman.

All the sparkling drama of Jane Austen’s Persuasion comes to life as old Lyme Regis becomes the site of the new big-screen adaptation of the classic. Kay attracts the attention of handsome actor Oli Wade Owen, Adam struggles to know the secrets of his own heart, and life in quiet Lyme gets very interesting indeed… (from the back cover of the arc)

When Kay Ashton purchased Wentworth House, a B&B in Lyme Regis, she never imagined that she would be housing the cast and crew of Persuasion and that the man portraying Captain Wentworth would strike her fancy. Yet, that is exactly what happens and since she is getting cozy with the Captain, Kay decides that it would only be fair if she aided the screenwriter and producer, Adam Craig in his quest for love.

Love is the furthest from Adams mind, but it seems that Kay is determined to set him up with Gemma, although Adam’s heart has other thoughts in mind. And the handsome actor, Oli Wade Owen proves that even though you play a hero on the big screen it doesn’t mean that you are one in real life.

Bringing to mind the matchmaking skills of Emma, Dreaming of Darcy is laced with twists and turns that will delight the reader.

I loved this book! Like Victoria Connelly’s previous Austen Addicts novel, A Weekend With Mr. Darcy, her new novel, Dreaming of Darcy has both a plot and characters that I thoroughly enjoyed. I found that I could not get enough of this book and I must admit that I have read it three times since receiving the arc.

Although the title is “Dreaming of Darcy” it may be a bit misleading for those of you looking for a Pride & Prejudice spin-off. While Mr. Darcy is mentioned, this book is centered around Persuasion.