I was looking through my stacks and stacks of Pride & Prejudice spin-offs and I could not help but to notice that the image they use on the covers of most of these books bears a striking resemblance to Frances Anne Vane, the Marchioness of Londonderry. 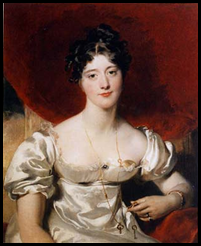 Who is the Marchioness of Londonderry?

-Through her daughter, Lady Francis Vane, wife of John Churchill, 7th Duke of Marlborough, she was the great-grandmother of Sir Winston Churchill.

-She inherited extensive lands from her father in north east England

-With her husband, she started an extensive coal mining operation that included coal mines, a railroad, and docks at Seaham.

-Tsar Alexander I of Russia became infatuated with her after viewing her portrait.

Do you think the covers bare a resemblance to to the Marchioness of Londonderry?