The Phantom of Pemberley: A P&P Murder Mystery by Regina Jeffers 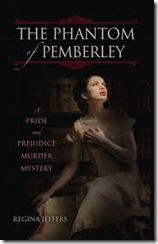 Happily married for over a year and more in love than ever, Darcy and Elizabeth can’t imagine anything interrupting their bliss-filled days. Then an intense snowstorm strands a group of travelers at Pemberley, and terrifying accidents and mysterious deaths begin to plague the manor. Everyone seems convinced that it is the work of a phan-tom—a Shadow Man who is haunting the Darcy family’s grand estate.


Darcy and Elizabeth believe the truth is much more menacing and that someone is trying to murder them. But Pem-berley is filled with family guests as well as the unexpected travelers—any one of whom could be the culprit—so unraveling the mystery of the murderer’s identity forces the newlyweds to trust each other’s strengths and work together.


Written in the style of the era and including Austen’s romantic playfulness and sardonic humor, this suspense-packed sequel to Pride and Prejudice recasts Darcy and Elizabeth as a husband-and-wife detective team who must solve the mystery at Pemberley and catch the murderer—before it’s too late. (from the back of the book)

A winter storm forces Pemberley to open its door to a slew of eccentric characters. Although the storm is not the only thing that the Darcy’s have to worry about, a mentally disturbed person is intent on making Mr. Darcy suffer. To do that, he knows that he must destroy Pemberley, one death at a time.

Ok, where to start…

I was intrigued that this was a P&P murder mystery. The way the plot unfolds and the mystery unravels gave it a CSI feel with Darcy playing detective—did I like that aspect? It was okay, but I will not wax poetically about it. Plus, I knew who the phantom was from early on.

The characters…well…since Pemberley became travelers rest there was an overflow of characters. Some were intriguing and added substance to the plot, while others seemed to be placeholders until something of interest came along.

The romance. Someone is creeping around Pemberley and Darcy and Elizabeth still find time to jump into bed. Seriously, I mean like every few pages they are tumbling into bed. It felt really out of place and a bit odd considering there is a murderer on the loose. Spoiler alert: Highlight to read Even Georgiana finds love in this book. And guess who it is. Colonel Fitzwilliam. Disturbed by that? Yeah, I was too.

While I enjoyed Mr. Darcy, Vampyre, this book wasn’t nearly as thrilling.

Buy or borrow? Definitely borrow this one.