After a mini-battle with a defective html code that was allowing quick-tags and posts from other people to appear on here as well as downed power lines due to a February ice/snow/ice/wind storm Addicted to Jane Austen was having a few technical problems. Thankfully, all is now in working order provided no more ice/snow/ice/wind storms. Please enjoy this review of Darcy’s Desire 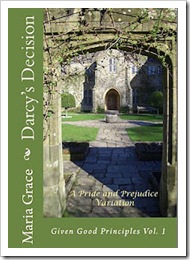 How I read it: Trade Paperback sent from the author

Six months after his father's passing, Fitzwilliam Darcy still finds solace in his morning reflections at his parents' graves. Only in the quiet solitude of the churchyard does he indulge his grief. None but his unlikely mentor recognize the heartache and insecurity plaguing him as he shoulders the enormous burden of being Master of Pemberley.

Not all are pleased with his choice of advisor. Lady Catherine complains Darcy allows him too much influence. Lord Matlock argues, "Who is he to question the God-appointed social order?" But the compassionate wisdom Darcy finds in his counselor keeps him returning for guidance even though it causes him to doubt everything he has been taught.

In the midst of his struggles to reinvent himself, his school chum, Charles Bingley, arrives. Darcy hopes the visit will offer some respite from the uproar in his life. Instead of relief, Darcy discovers his father's darkest secret staring him in the face. Pushed to his limits, Darcy must overcome the issues that ruined his father and, with his friends and mentor at his side, restore his tarnished birthright.

(from the back of the book)

Although it is billed as a P&P variation Darcy’s Decision is actually a prequel to the highly favored novel and is about Darcy’s life before the Netherfield Ball, so those of you looking for Elizabeth to show up in the novella may be a bit disappointed.

With that being said, let me tell you that I enjoyed this novella. You have probably read many times before where I have posted the quote from Jane Austen where she states that she could not write a novel with a man at the center as she did not know what they got up to when left alone, and while I absolutely love and adore her novels, I feel that the whole story is never fully told. So many gaps are left for others to fill and with this novella I feel that a few more pieces are coming together.

In Darcy’s Decision, we get to see that journey Darcy goes through while acclimating to life as the new master of Pemberley and as a reader who is overly analytical, I have often wondered how he felt about this transition. Not only did he have to struggle with the burdens of heirship but he had to find the balance between acting as Georgiana’s guardian and brother.

While I did like the novella and highly recommend it there was one element that sort of came out of left field and while I wasn’t over thrilled with it, I could see where Maria Grace was coming from and if you think of Miss Austen novel Sense and Sensibility the theme of illegitimacy was an approach that she take on. Some readers may feel that it was too far off for their taste however; I do think that you should give this novella a chance.

Overall, it was a quick read, (I read it in less than an hour), that explores the road not taken and shows a different side to Darcy as well as a different approach to Wickham.