This blog tour has been fun, and I appreciate bloggers like Angela allowing me to share my new novel on their blogs. Alias Thomas Bennet is a Regency romance that follows canon in Pride and Prejudice, while changing the character of Mr. Bennet to make him less indolent and lackadaisical. In no way does that make him boring, though!

But with a different Mr. Bennet, many things in Pride and Prejudice can change. Different Meryton assembly. Different Hunsford. Different Jane and Elizabeth?

I think this last excerpt will prove to be the most interesting of all. It’s from Chapter 24. Elizabeth is in London, staying with the Gardiners, while she purchases her wedding clothes.

Elizabeth was full of trepidation. She hoped her disquiet would go unnoticed by Mrs. Younge; she did not want to alarm the other lady.

Silently chastising herself for walking out without Roberts and Jenkins, she considered whether there would be anyone else nearby upon whom she could rely for assistance. She thought of the servant she had seen earlier and wished she had not walked so far. She considered grabbing Mrs. Younge and attempting to run away but discounted that idea since Wickham would surely catch them given their encumbrance of long skirts. At least with the other woman as witness, there could be no accusations of a compromise by Wickham.

“What a pleasure to see you and your companion walking out on such a lovely morning, my lady!” he said as he rounded upon them. “How fortunate you have found a place with such beauty for an early morning promenade. Tell me, do you think the city park measures up to the countryside?”

Elizabeth’s eyes narrowed, and she gritted her teeth. In spite of her fear, she was angry at Wickham’s gall. She was about to challenge his familiarity with country walks but then reconsidered her manners and dropped her gaze, for she did not want to aggravate him with any impertinence.

“I understand I am to offer you joy on your engagement to Mr. Darcy. He is a very lucky man to have won the hand of such a beauty,” Wickham said almost blithely. “He and I were good friends as children. Perhaps you can speak to him on my behalf since I miss his companionship deeply.”

He then turned his attention to the lady standing beside Elizabeth. “Can you introduce me to your friend?”

Mrs. Bertha Younge was an enterprising woman. She had done well in her current occupation, even though it was several steps below her prior work as a lady’s companion. Her only weakness was her obsession with George Wickham.

Claiming he could not live without her nocturnal charms, he had arrived at her doorstep the week before. She knew when she was being taken in; in all likelihood, a new scheme to gain riches or importance was on his mind, and he needed her to take a risk on his behalf. This time, he claimed that he had been ill-used and forced into hiding in the interminable warrens of London.

He did not even try to persuade; rather, he commanded that she discover ways for him to achieve his ends undetected, and to act on his behalf without his exposure. His cocksure nature angered her.

As usual, he promised a share of the proceeds. She hoped rather than believed that he would obtain the riches he claimed were there for the taking. He returned in the dead of night two days ago, demanding a report on her progress.

“There are two enormous footmen consistently attending the ladies when they make their excursions,” Mrs. Younge reported. “They arrive in Gracechurch Street before breakfast and do not return to Darcy House until all the inmates of the Gardiner home have retired.”

“Then it appears I need more than your feminine charms,” he said. “I need muscle. Anyone for hire in Seven Dials will do.” It was clear he was impatient by the way he issued orders to her.

She shook her head. “I cannot convince brutish fellows to help you in your enterprises, at least not without some form of payment beforehand. I promised them a reward once you become successful, but I was laughed at. It seems you have made a few enemies.” She knew he was desperately without funds at the present time, and he was not known for keeping his promises of future payment.

Wickham huffed and looked at the ground. She intentionally left a silence between them for a few moments.

“However, I did see a break in the times the guards were near Elizabeth.” That caught his attention, and he looked at her expectantly.

“Twice, she has walked out alone very early in the morning,” said she, “and returned before Darcy’s brutes arrived. Thus far, she has not yet been caught by any of her family or their servants. She chooses to walk in a park near her relatives’ home in Cheapside.”

She smiled inwardly as he brazenly outlined his strategy. He fancied himself a brilliant tactician, above all others in intelligence, but had no ability to take his own culpability for mistakes seriously and constantly looked for someone to blame.

I would like to thank Suzan Lauder for allowing me to post an excerpt of her book, Alias Thomas Bennet. 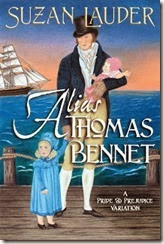 …of most interest to Bennet was Mr. Darcy of Pemberley.

When Fitzwilliam Darcy attends the Meryton assembly, he befriends a quiet, intelligent gentleman. In frequent visits to his friend’s home, he becomes acquainted with the Bennet family of Longbourn. Yet Mr. Darcy is distracted by a strange feeling of having met some of them before.

This is a different Bennet family from the cleverly crafted one in Jane Austen’s Pride & Prejudice. This Mr. Bennet is a responsible gentleman who takes an active role in the education and upbringing of all five of his daughters, manages Longbourn to be prosperous, and displays loving guidance toward Mrs. Bennet—a gentle, caring mother and wife.

There is a mystery lurking at Longbourn—a secret unknown even to Elizabeth Bennet—and Mr. Darcy is entangled in its extraordinary revelations.

Who is Thomas Bennet?

I have 1 paperback copy and 1 e-book to giveaway.

Email ThisBlogThis!Share to TwitterShare to FacebookShare to Pinterest
Labels: giveaway