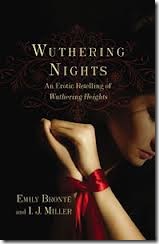 Romantics everywhere have been enthralled by Emily Bronte's classic novel of the tragic love between beautiful, spirited Catherine Earnshaw and dark, brooding Heathcliff. The restrained desire between these two star-crossed lovers has always smoldered on the page. And now it ignites into an uncontrollable blaze. In WUTHERING NIGHTS, writer I.J. Miller reimagines this timeless story to reveal the passion between Catherine and Heathcliff--in all its forbidden glory.

Set against the stark, raw beauty of the English moors, Heathcliff, an abandoned orphan, recognizes his soulmate in wild, impulsive Catherine, the only woman who can tame his self-destructive nature. And Catherine cannot deny the all-consuming desire she feels for him, despite his low birth. Together they engage in a fiery affair--one that will possess them, enslave them, and change their destinies forever... (taken from publishers website)

First Thought upon finishing the novel: What did I just read?

What I wasn’t expecting was the following:

Mrs. Linton (as in the mother of Edgar and Isabella) and a servant— Not quite so shocking and actually would have been a bit funny if the servant would have been Joseph.

As a lover of Wuthering Heights, I was curious to read Wuthering Nights. I truly wanted to love this book, or at least like it, and while there were parts that I liked such as Hareton and Cathy’s story being told at the end of the novel, I found that this was not the book for me.

I have to say that this was the worst book that I have ever read. I.J. Miller has taken Heathcliff, the idyllic Byronic hero, and turned him into a perverted nutcase that holds no trace of Emily Bronte’s Heathcliff save for his name. Perhaps Mr. Miller should reread Wuthering Heights and realize that Miss Bronte relied on the atmospheric moods of the tumultuous Yorkshire moors to tell the story of Heathcliff and Catherine rather than a dirty dungeon of doom. By taking out the atmosphere of Wuthering Heights, Wuthering Nights has lost its core. The only way for me to describe this book is 50 Shades of Wrong…

There are some books that you wish you could unread and, for me, Wuthering Nights is one of them. 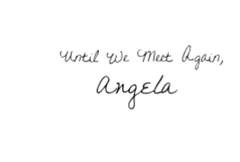