When I am not devouring the work of Jane Austen, I am reading/watching Jane Eyre by Charlotte Bronte. And since Valentine’s Day is approaching on the 14th and my birthday is on the 19th, I thought this would be the perfect time host a few giveaways.

The first giveaway is the 1969 adaptation of Jane Eyre. 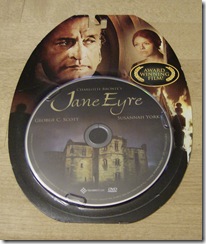 Charlotte Bronte’s classic Victorian novel comes to life under the skillful direction of Delbert Mann. Adapted in the Masterpiece Theatre style of television. Susannah York stars as Jane Eyre, the orphaned girl who secures a position as a governess to the ward of Edward Rochester (George C. Scott), lord of an English manor called “Thornfield”. When Jane and the moody and tyrannical Rochester fall in love and agree to marry, his dark and sinister past comes to the surface and crashes down on both Rochester and the innocent Jane. (from the back of the movie cover)

As this is a Region 1 DVD, the giveaway is only open to residents of the US and Canada.

Do you have a favorite movie version of Jane Eyre? Was there a certain actor/actress that embodied your version of Rochester/Jane?